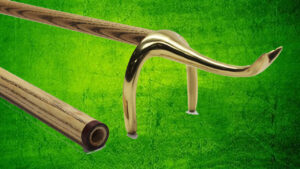 All top players have a bridge with which they take a firm grip of the cloth and provide a channel through which they send the cue on a straight line.

Without a good bridge, you are doomed. You are a no-hoper. An unsteady bridge can ruin everything. If there is any movement, say with the thumb, any shot can go wrong.

I believe that more players should be more concerned with getting the bridge hand firmed up. Place the hand flat on the table. Then draw up all the fingers in a crab-like manner before cocking the thumb is such a way that you are able to form a V between your thumb and the top knuckle of your forefinger. Emphasise the firmness by pressing the forefinger into the cloth.

Anyone who wants to realise just how important the bridge is need only try a simple experiment. Bridge along the baulk line, making sure that the cue covers the baulk line itself so that it is no longer visible from above. Now lower the thumb and notice what happens. The cue goes off line. If that should happen while you are playing a shot, it is one way of putting accidental side on the cue ball.

However, do not drag your bridge hand back, particularly against the nap of the cloth. There is no advantage in this and it will create so many furrows that the table will look like a ploughed field. It could also rough up the nap sufficiently to make slow shots more hazardous. When you have completed your shot, just lift your hand from the table.

I believe that players pressing the first finger into the cloth will aid firmness along the left-hand side of the body. If the left side is firm, it seems to make the right hand even more free to get rhythm into the cue action. The reverse, of course, is true for left-handed players.

Joe Davis adapted his bridge for screw shots by turning the hand over on to its side just by lifting the left of the palm. But this is not the only way. Most players today simply lower the whole hand and still maintain a good V in the bridge. It is up to you which method suits you better.

For a very deep screw shot, Joe would use the loop bridge, which very few players use today. The real reason he used it, even if he was not aware of it, was that he was inclined to lift the cue when striking the cue-ball. This came about because he had the flourish so many Billiards players have of lifting the cue when playing a forcing shot – sometimes even striking the light shade with the tip. The loop bridge counteracted this by stopping the cue coming up.

Young players today appear reluctant to use the loop bridge, but my advice is to try it out. It can be adapted for playing over a ball when stretching across the table or, when the cue-ball is tight to the cushion.

Cushion heights can very marginally, but whatever the circumstances there is not much of the cue-ball to hit when it is tight against the cushion and you have to play outwards from it.

A method that Steve Davis operates very well is to raise the bridge part of the hand very slightly as it rests on the cushion rail. If you watch Steve in a situation like this, you will notice he can cue freely without the tip of the cue coming into contact with the cushion.

Obviously, you should not try to do anything very ambitious with the cue-ball in this sort of situation, but if you need more power, raise the bridge slightly higher. Once again, firmness of the bridge hand is essential. These shots do mean you have to hold the cue at an angle instead of near the horizontal – which in itself is not a good thing – but smooth cueing and, I repeat, not attempting too much with the cue-ball will help to even things out. You will at least be more positive on the shot if you are actually coming down on the cue-ball rather than trying to strike it by scraping along the cushion rail.

When playing unusual shots, most players fail because their preparations lack rhythm or are otherwise not right. If they knew how to go about it, their apprehension would disappear. It is all a question of practice and making the correct choice of bridge, though you can, of course, practise as much as you like and some positions will still be a lot more difficult than others.